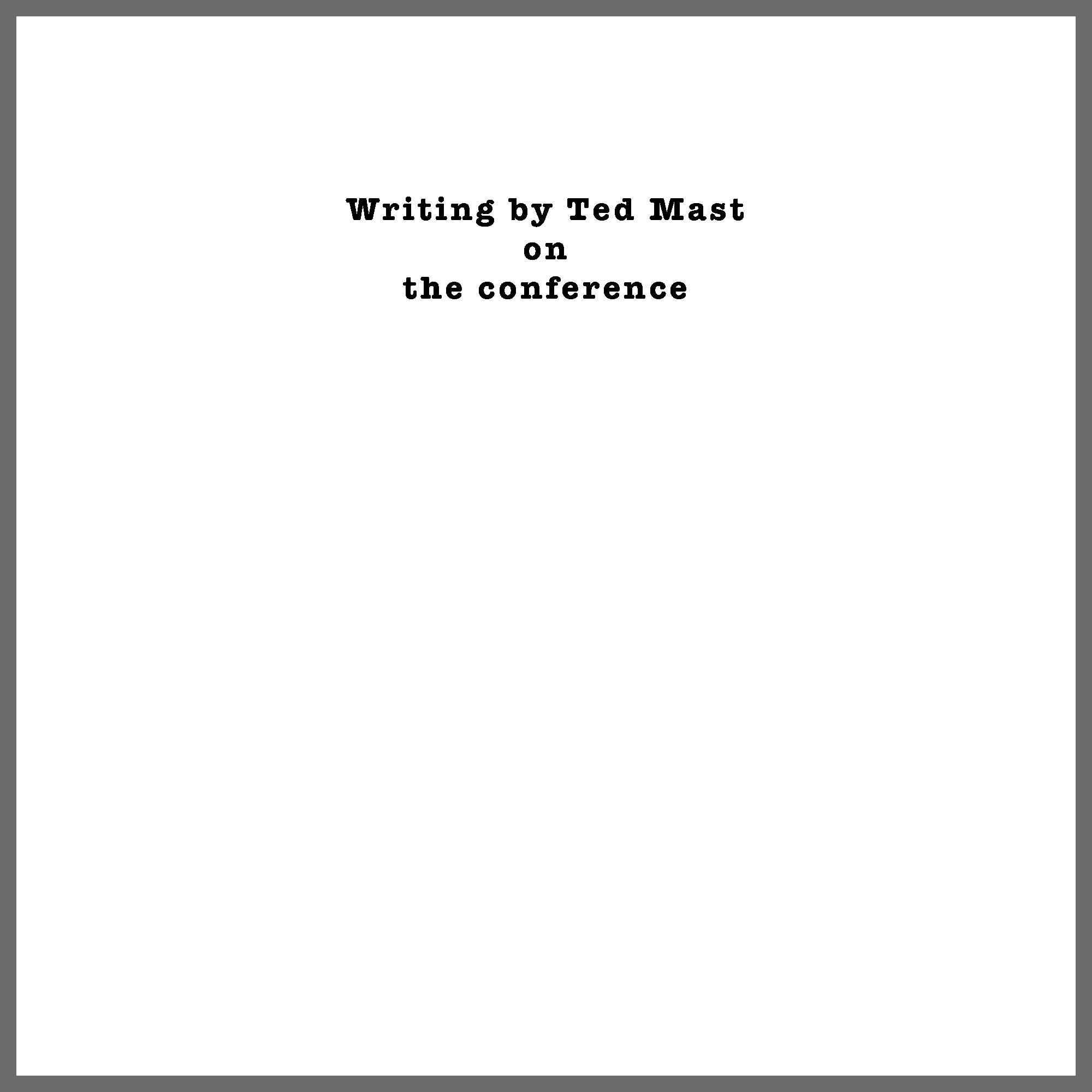 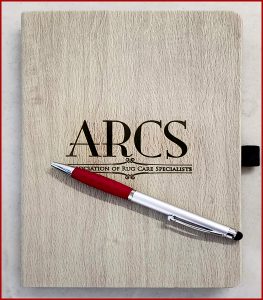 Over 100 rug specialists from all over the country were in attendance.

On the first day of the conference four speakers presented stories from their lives in the rug industry.

Dr. Mast discusses a Caucasian rug, circa 1900, with Synthetic dyes ( left); and a Kerman, circa 1930, in which the border and field design have merged (right ).

Ted’s passion for rugs began as something of an unexpected epiphany.  He finished his B.A. in Art and Art History at Metropolitan State College in 1976 and had always taken notice of certain antique oriental rugs.  In 1979, he was dealing and restoring antiques while pursuing writing when one late afternoon on a cold November day, he attended an auction at Estate Liquidators on East Evans. A beam of low raking afternoon sun fell through the window onto a rug in the corner.  He was mesmerized by it’s presence and ultimately purchased it (a Baluch rug, circa 1930-40).  His deep research to find out exactly what it was led to his lifelong study of oriental rugs, rug weaving, the rug trade and his collecting and study of rugs. His studies included a Master of Humanities from UCD in 1986 and a Ph.D. in Folklore and Folklife from the University of Pennsylvania in 1995; both of these degrees were based on his study of oriental rugs, textiles and Near Eastern cultures which has led to publishing articles as well as curating and designing rug exhibitions. He has been a contributing writer for Hali magazine since 1996 and is a Life member of the Hajji Baba Club of New York.

Ted’s talk focused on differences between rugs of the past and rugs of the present with specific references to dye technique and the revival of natural dyes.

Discussing an “Azeri” rug, circa 1990, with all-natural dyes, made by Woven Legends.

ARCS member shows audience an example of a stripped and painted mat, in this case, not a typical Saruk, but a Kashan. 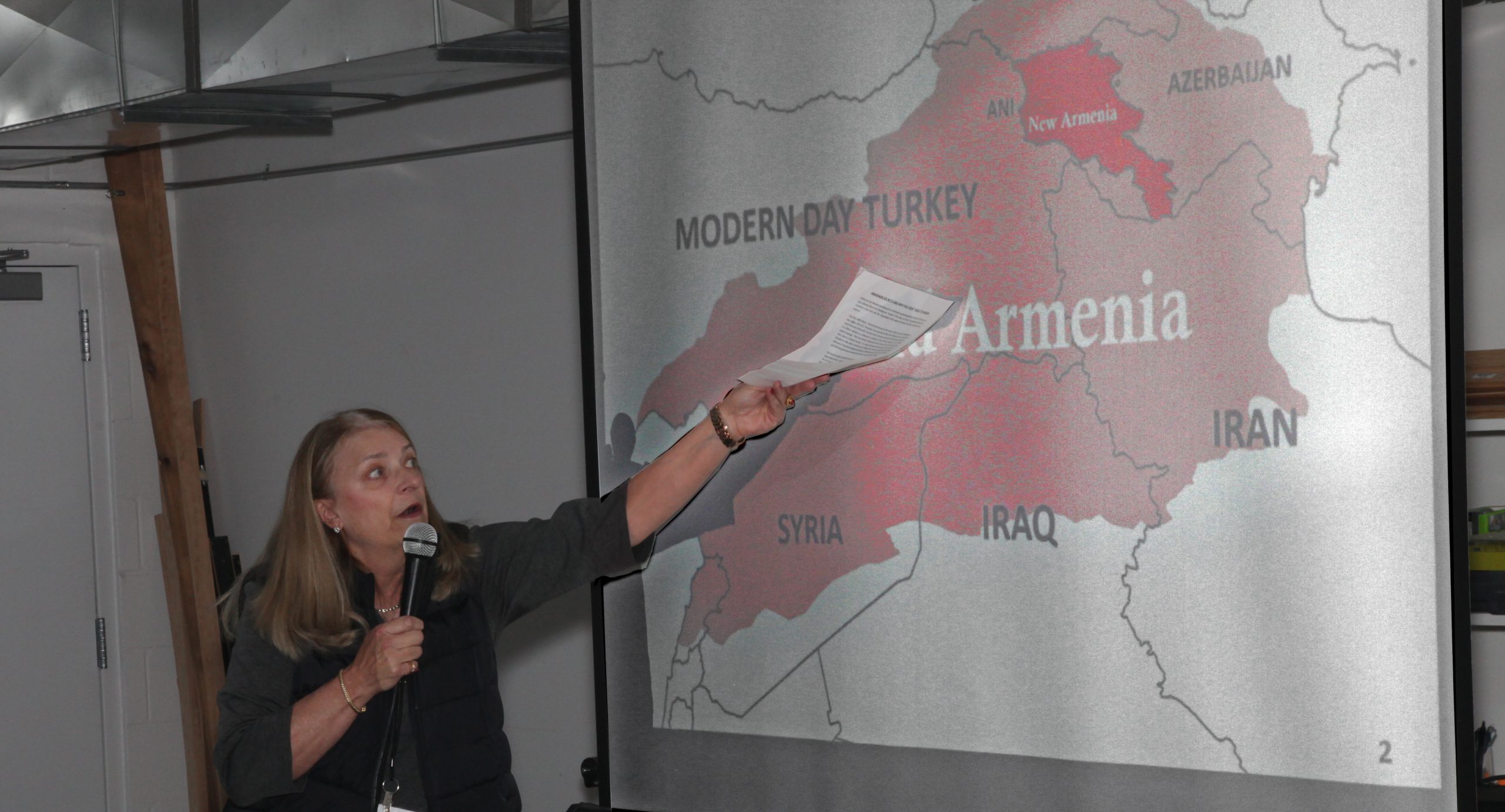 Ellen is presently President of Oriental Rug Cleaning Co. – a state-of-the-art cleaning, restoration, appraising and selling business located in Dallas.  Ellen was born into a multi-generational rug industry family.  Since childhood, the fiber of her character has been a tapestry woven over a lifetime in the business.  Her Armenian heritage is a source of great pride in which she acknowledges the many contributions that Armenians made to rug restoration as it evolved in America.

As usual, Ellen’s powerful presentation was entertaining and thought provoking.  She sited the 1915 Armenian genocide as a source of Armenian survival mentality that persisted after assimilation into American culture with the American-Armenian refugees in the rug restoration industry. Through many great stories, she shared with us what it was like growing up in an Armenian rug plant and building a rug industry on the shoulders of those who preceded her in Armenian immigrant history.

Paul and Ellen have a lot in common as Paul also grew up in a multi-generational family rug business.  Paul presently runs Rug Renovating out of New York City.  Founded in 1896, it is thought to be the oldest rug cleaning and restoration business in the United States.  His presentation went into the history of Rug Renovating with many wonderful historic photographs from the last century.  Being located in NYC, it has always been directly connected to the rug trade and has had many life-long employees.  Interesting highlights of his talk included historic photos, the stories behind them and of special interest, the techniques that were employed for hand-painting rugs. 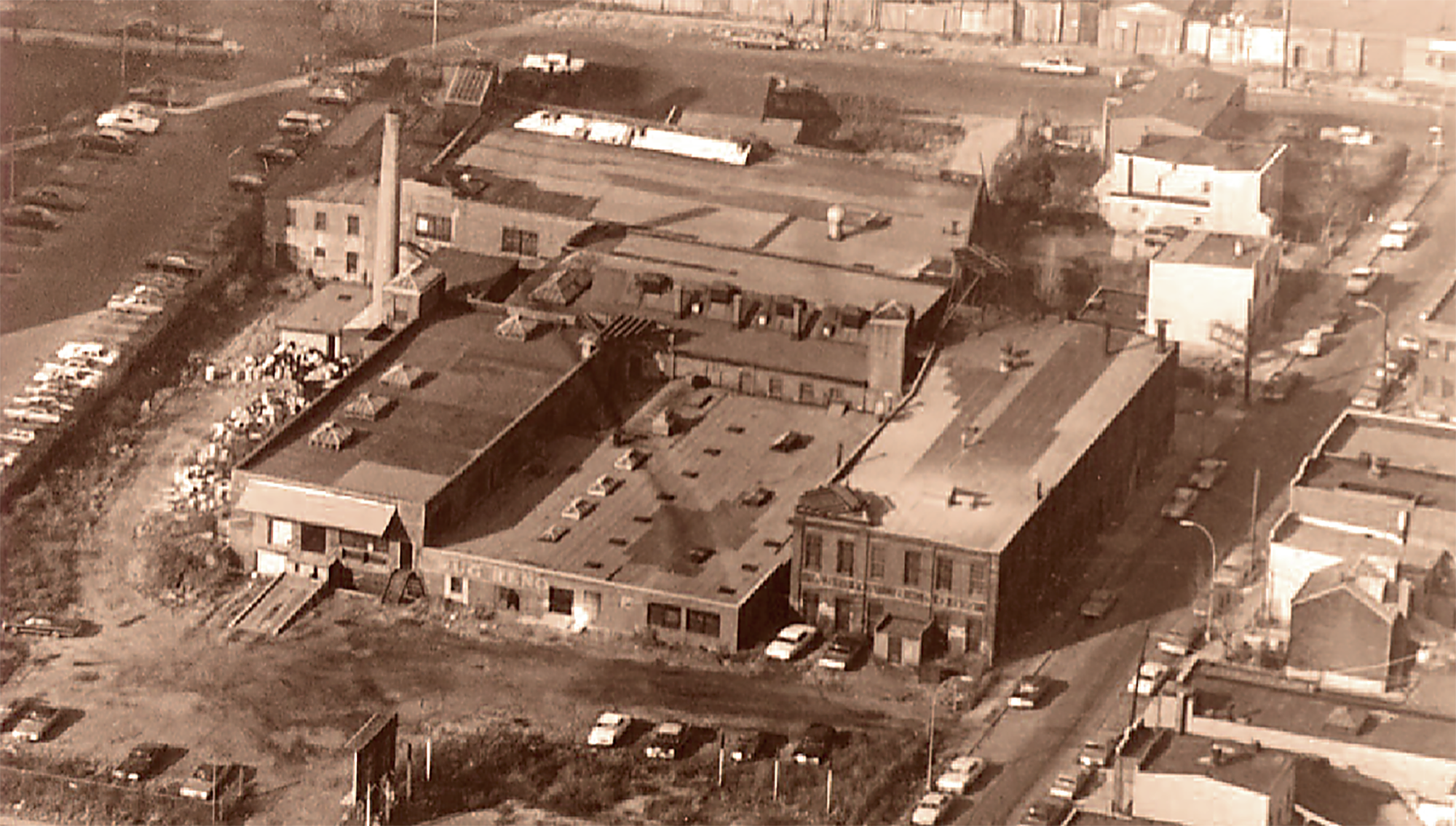 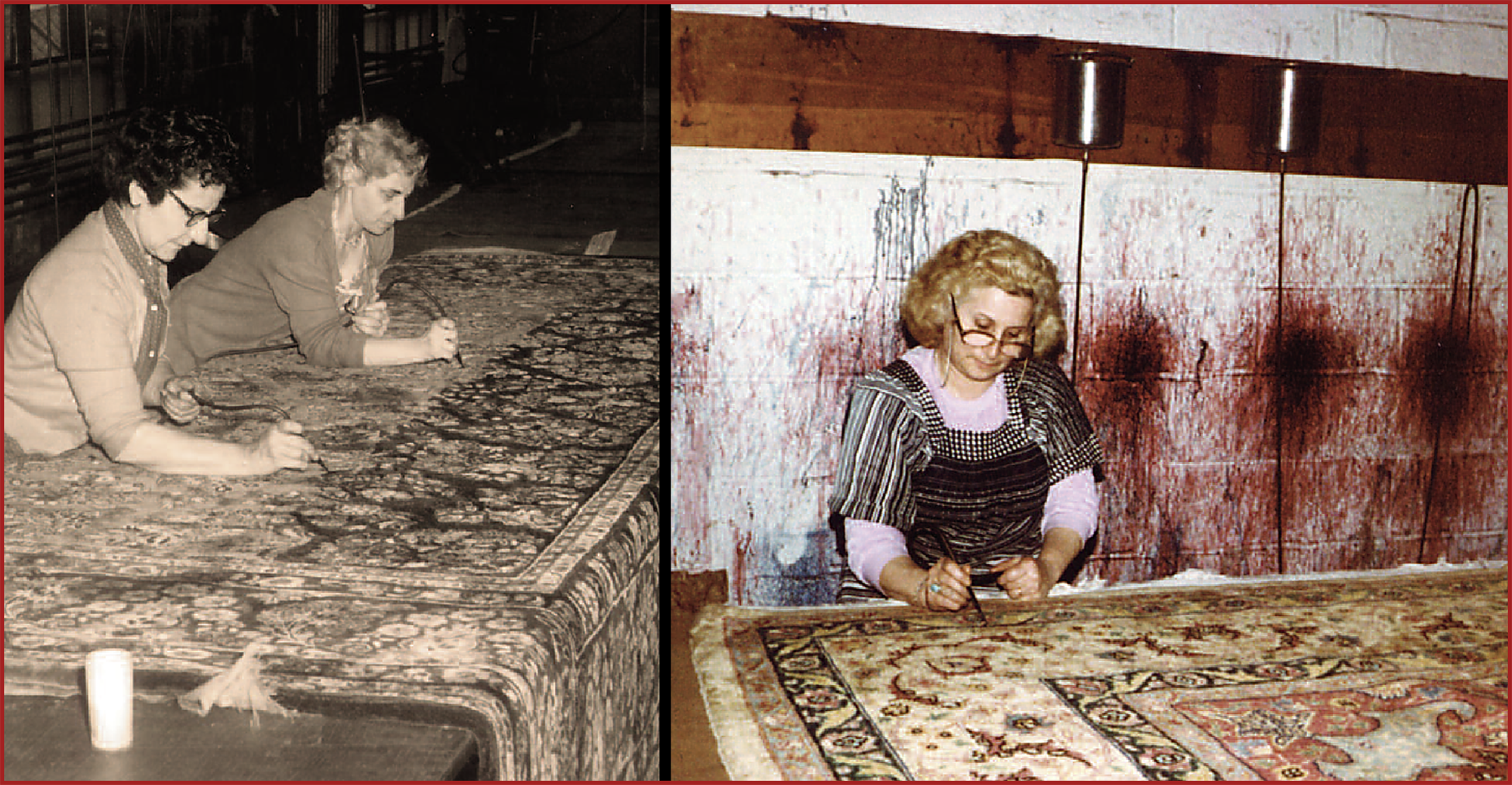 Women hand-painting (overdying) a Sarouk Rug with dye-tubing that can be seen hanging in the background at Rug Renovating, 1940’s

Michael has been involved in the rug industry since 1996 and is known for his writings on the handmade rug and on the carpet industry.  It was in 2016 that he traveled to Nepal and was overwhelmed by the experiences he had with rug weaving  and the Nepalese culture.  Nepal changed his ideas about rugs forever, transforming his thinking about rug distribution, sales and production to include an appreciation of the social aspects of rug making.

Michael gave a talk in which he reassessed the world-driven changes happening in the rug industry today.  He stressed the importance of finding new, creative and sustainable paradigm shifts in the rug trade using recycled fiber in handmade productions; his perspective of our ever-problematic and ever-changing world included a view where benefits could be passed down to customers and at the same time, the lives of the people who produce rugs. 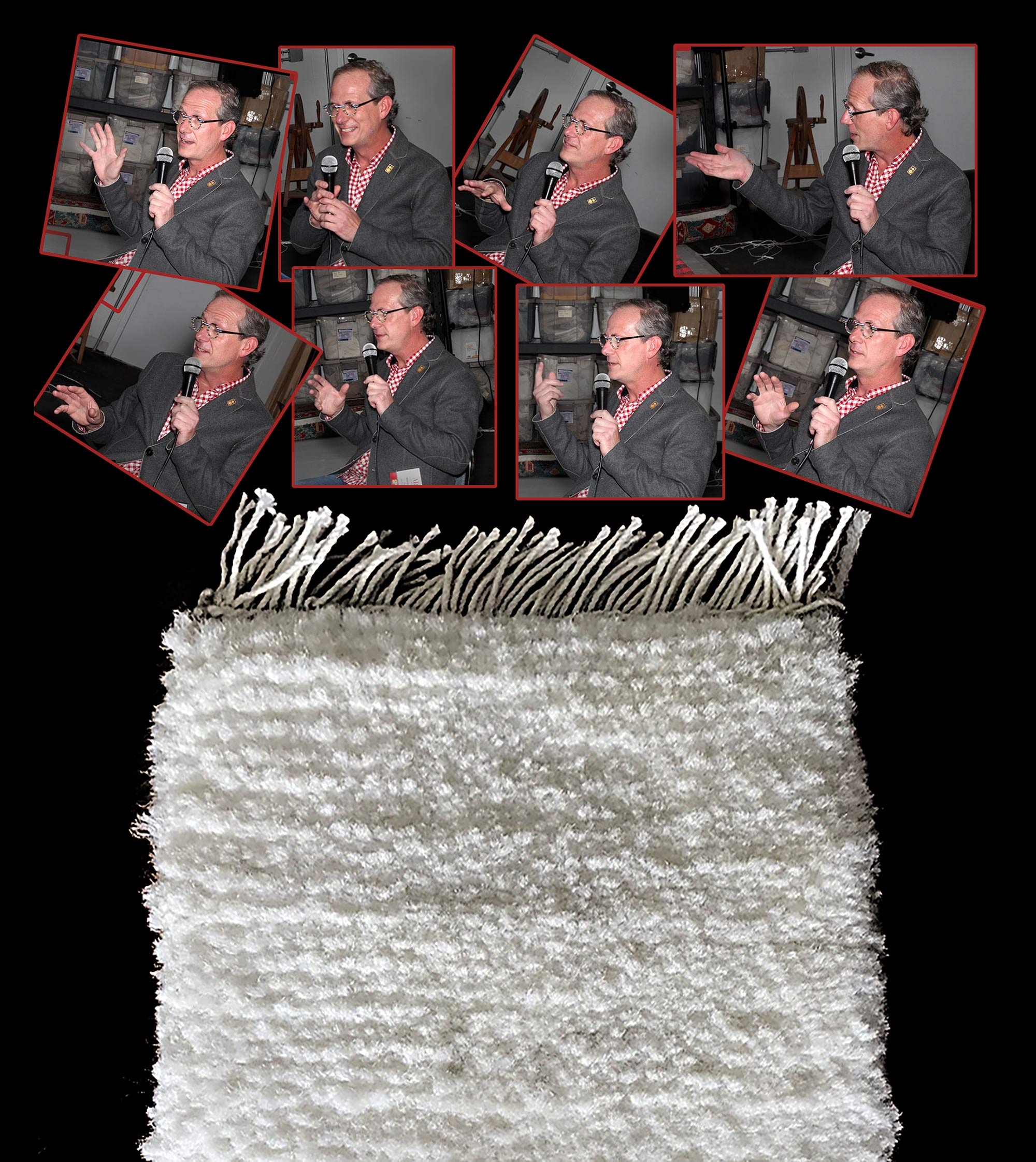 The second day of the workshop consisted of a track of four rotating workshops.

Scott Ring, of Woodard Cleaning and Restoration, gave a workshop on “Finishing” which emphasized post cleaning and finishing as an important step in making rugs look their best. The workshop included grooming of nap and fringes, removal of residual spots or stains, overall examination for any remaining problems or issues to guarantee the best end result. 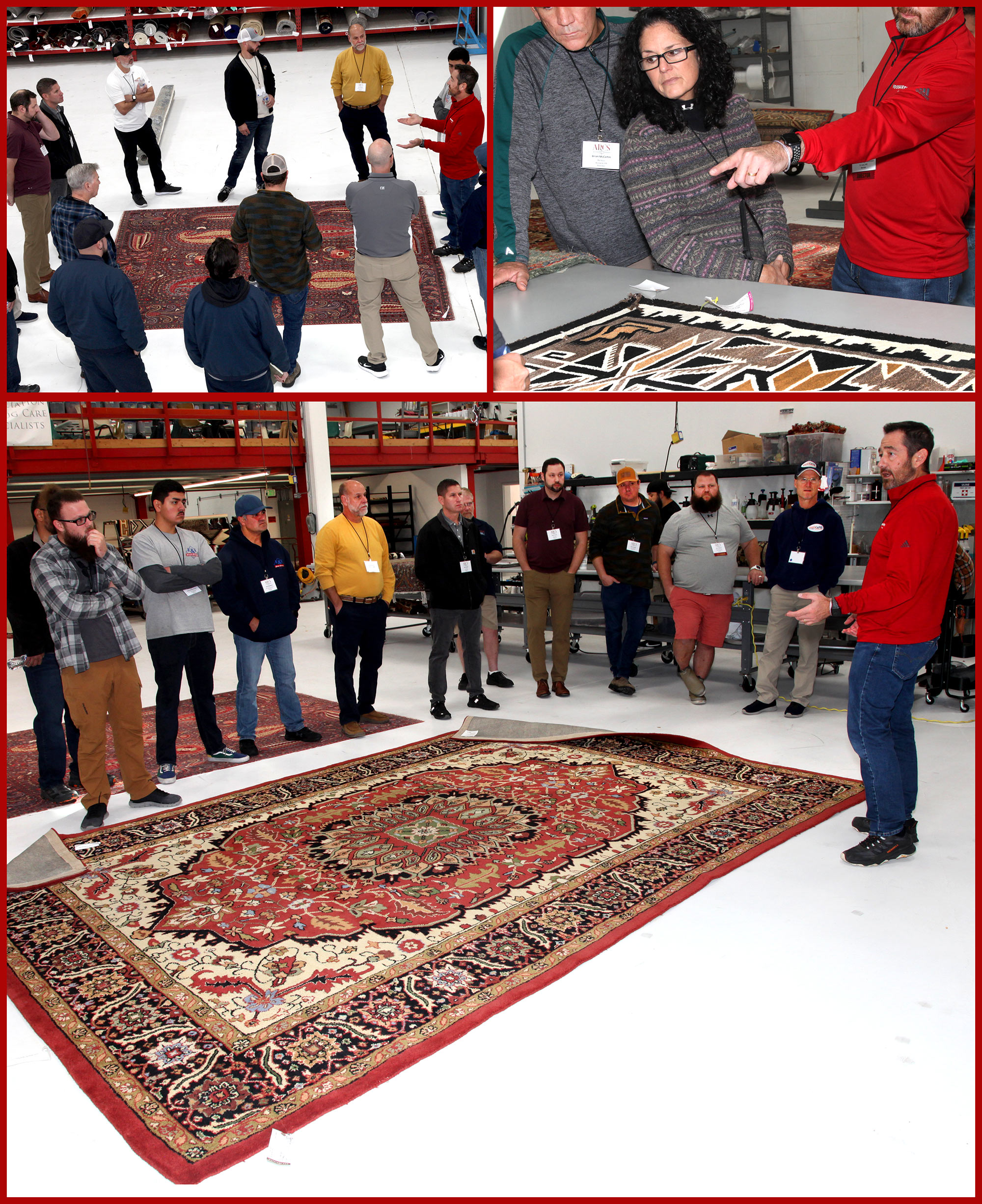 Tim Urbak, of Atiyeh Brothers, Portland, Oregon, led a workshop on intake and check-in procedures. In wash plants, the examination of rugs on arrival is where problems are found and a plan for treatment is made. Unexpected problems or conditions can be brought to the client’s attention at this time and is the most important step in maintaining quality control and good customer relations. 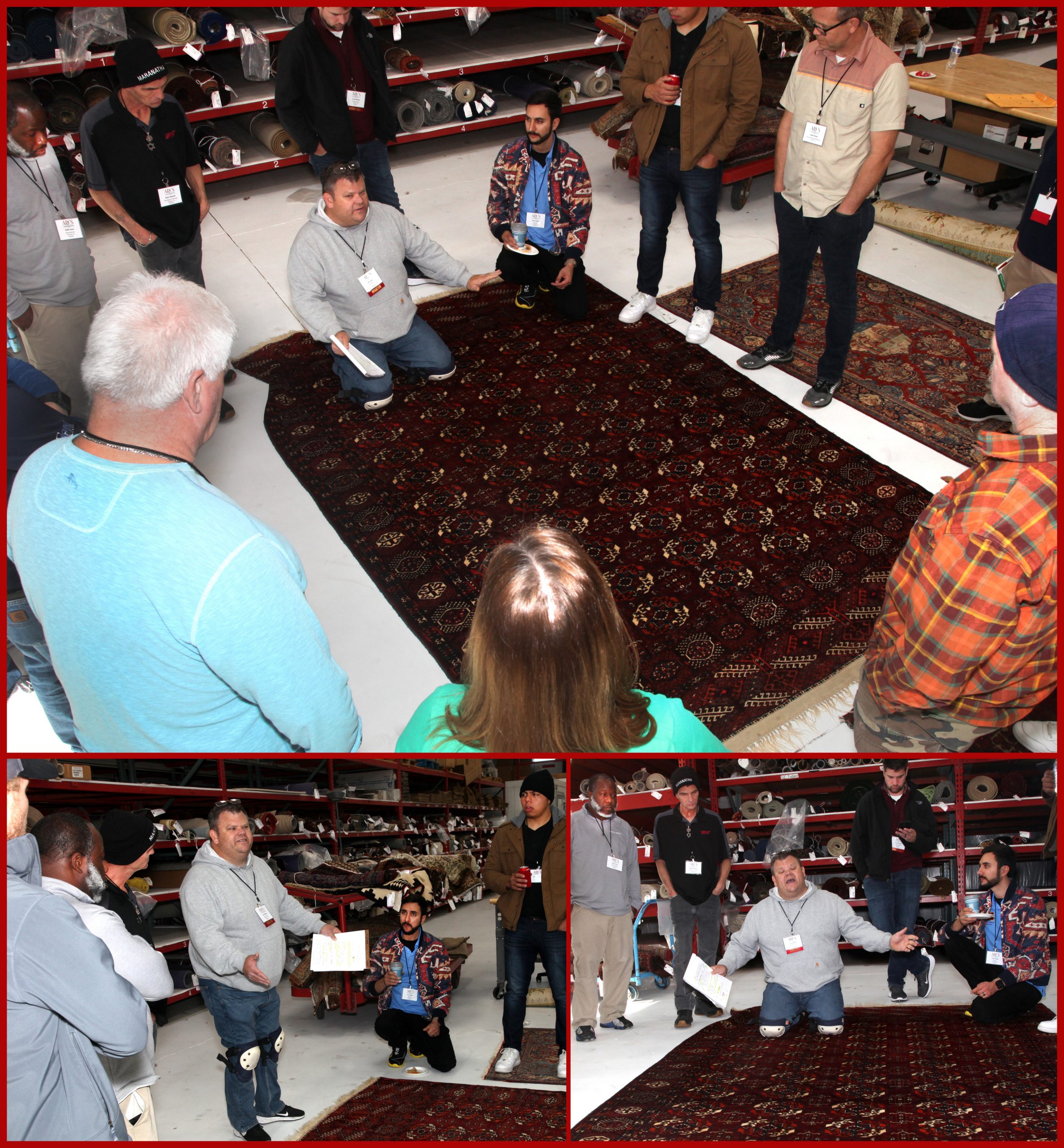 Armen Dohanian, of Bon Ton Rug, Boston, Mass. and Jordan King of Oriental Rug Cleaning, Indianapolis, led a workshop on color stripping and dye bleed removal. The treatment and removal of dye bleed is a skill that takes practice and time to learn. This demonstration illustrated the basic procedures of these processes. 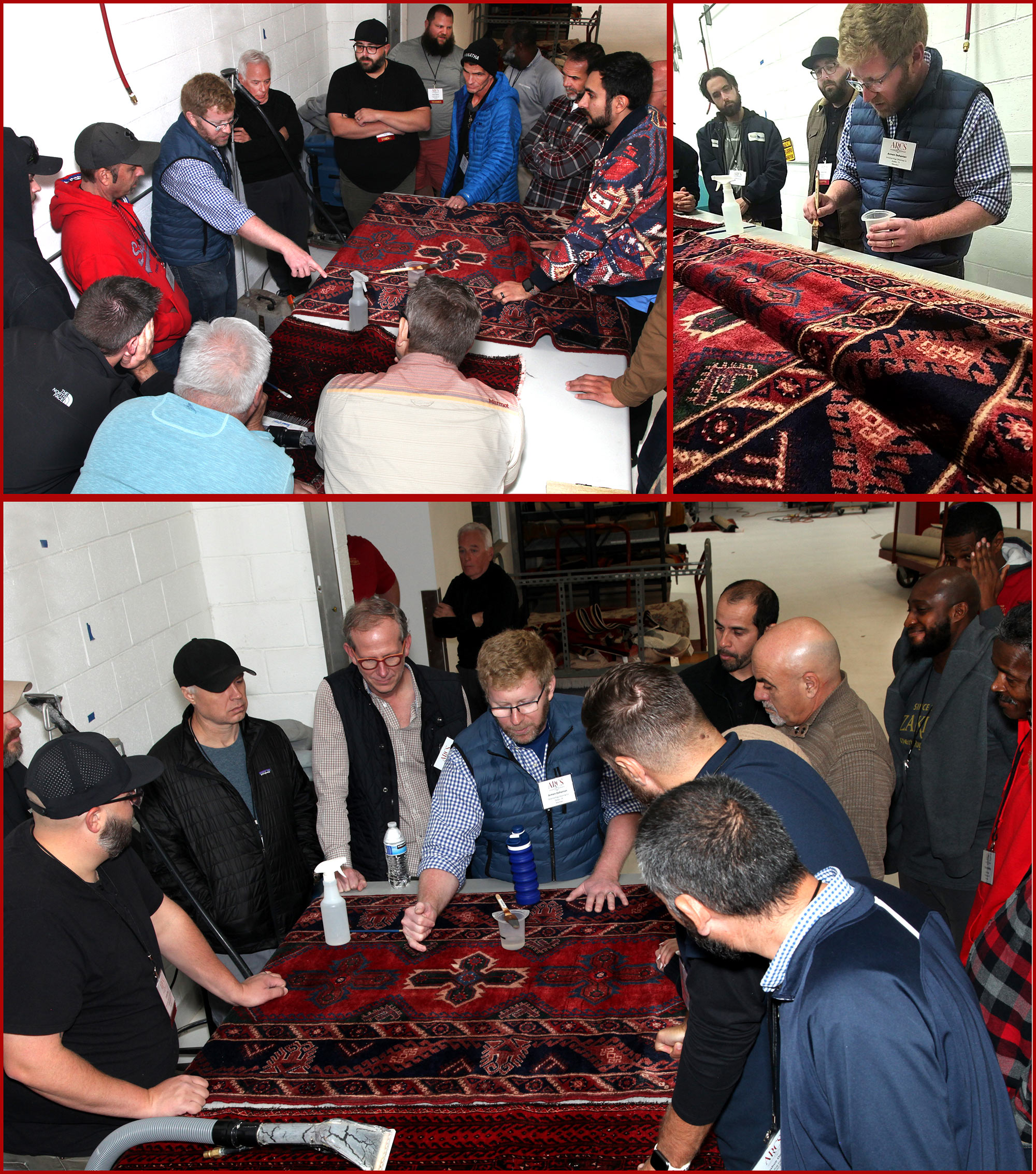 Andrija Malbasa of Oriental rug Cleaning, Dallas taught a workshop ‘Blocking and Stretching’. Usually the result of weave irregularities and differential shrinkage problems, rugs often come out of a wash plant drying-room out of square or not laying flat.  Andrija demonstrated basic hands-on techniques to correct these problems in order to maintain the best possible appearance of our customer’s rugs. 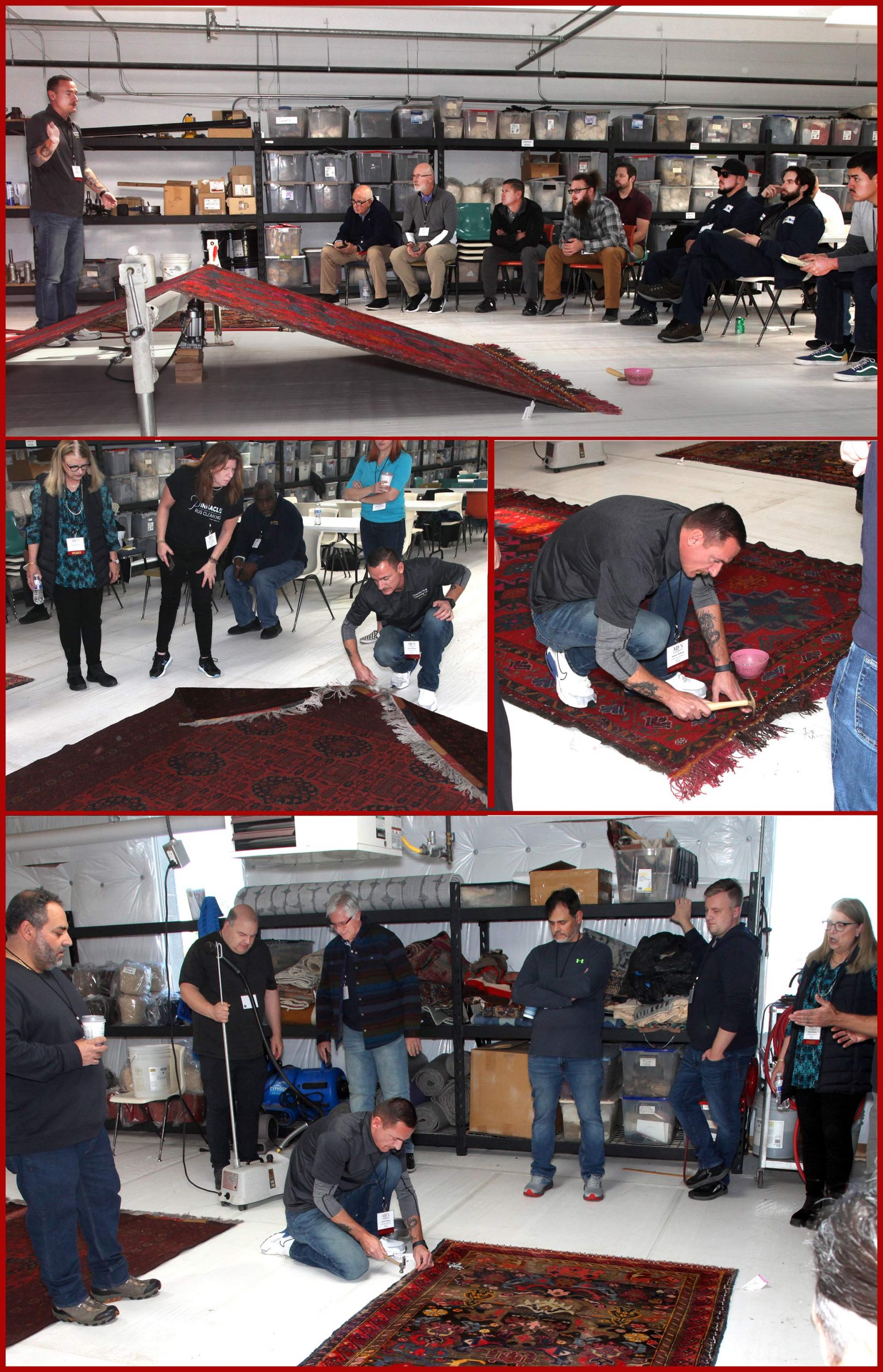 Jack Stallings, Hagopian Rugs, Detroit, Mi. and Steven DeMarco, Triple S, conducted demonstrations throughout the conference called “Construction/Deconstruction”. In the demonstrations, small sample pieces of rugs were taken apart with the idea of using construction and structural features of different rugs as a means of identifying origin and age. 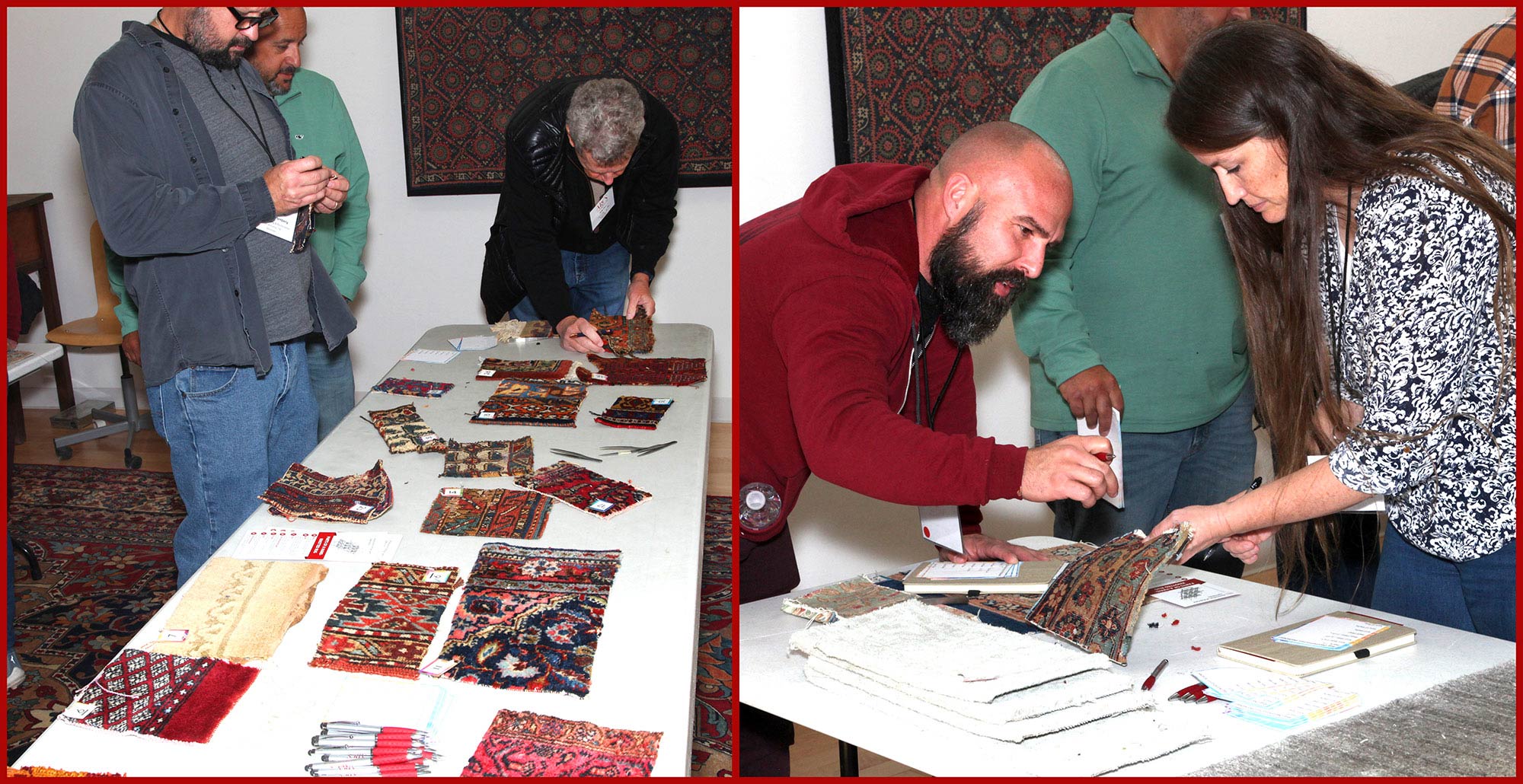 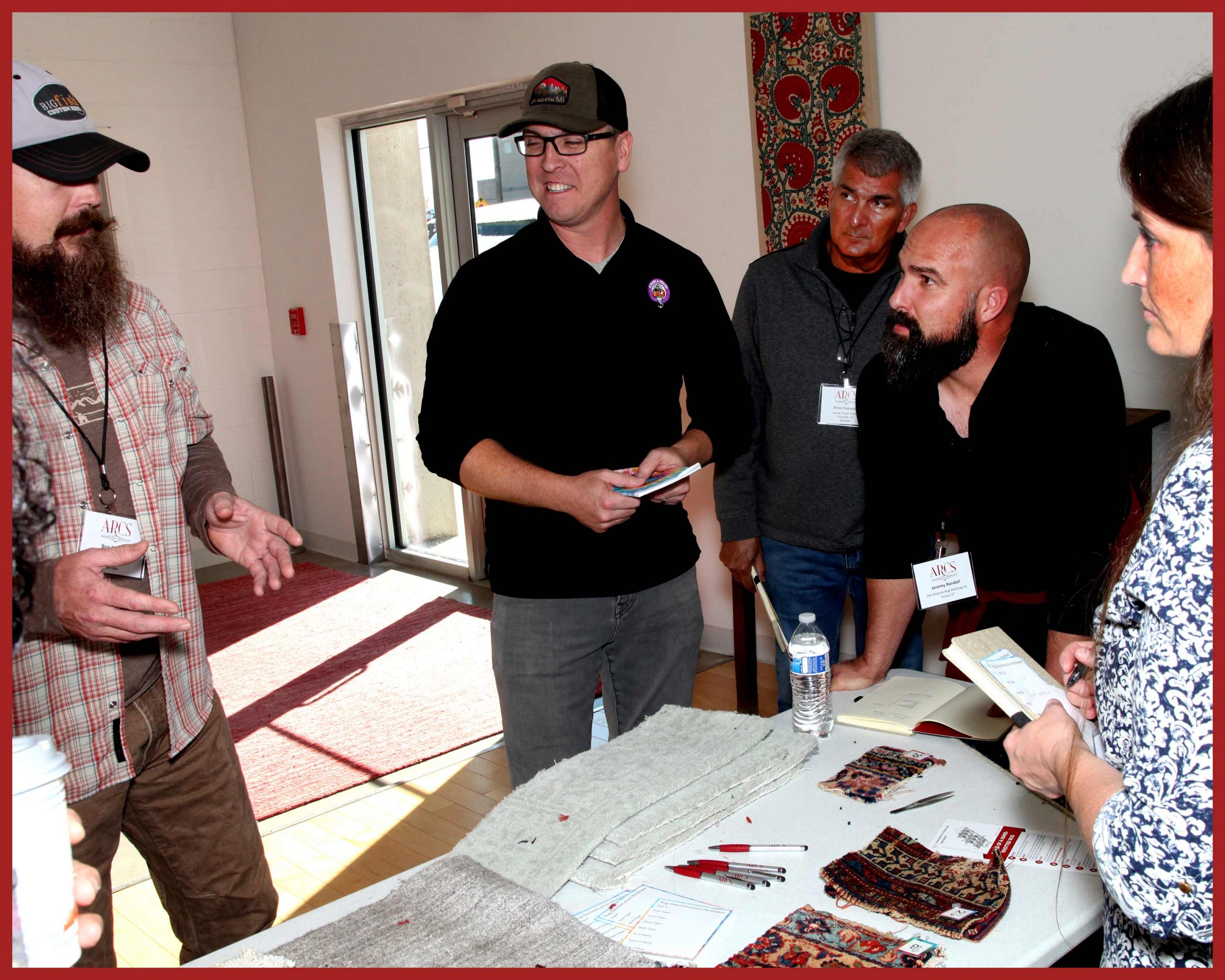 In the RMR showroom, rug samples were set up to analyze rug construction.

Rug discussion amongst members was to be found in every corner throughout the conference.

The last day of the conference was a day of hands-on rug washing on the Robert Mann wash floor.

To see more pictures from the conference visit the 2022 Rug-A-Paloosa picture gallery.